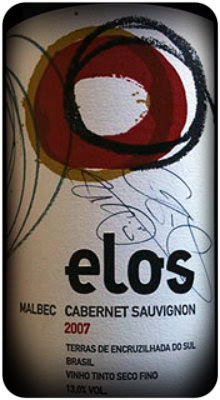 Once I'm in Brazil, I felt almost obliged to taste something national.

I always had in mind that Brazilian wines are not good, mainly because of the value rather than the quality. Now is time to check.

I got into a nice wine shop, in a beautiful shopping center. The attender, very friendly and helpful, seemed desperate to help me - what I allowed. I told him I'd like to prove a good brazilian wine! As any other salesman, he brought me the top line ones, which I politely declined. I was looking for something honest, as honest are the Argentine and Chilean wines in the 40 to 50 reais range (15 to 20 euros). He suggested me with a Elos 2007, Lidio Carraro, which tasted in my parents' house in São Caetano do Sul, SP, Brazil.

The Wine:
Elos 2007, produced by Lidio Carraro in Terras de Encruzilhada do Sul, Bento Gonçalves, Brazil. It has 13% of alcohol and is made from the Malbec and Cabernet Sauvignon grapes, without stating the percentage. It cost me R$65 (€ 25).

On the eye:
The color was not very clear. Suggested to be a deep yellow-brown, but actually was a little hazy, almost bricky.

On the nose:
The aroma was somewhat unclear, without much definition. Medium intensity, with subtle notes of blackberry, raspberry and a bit of cooked red fruit jam.

Conclusion:
Could be a good wine, on the boundary of the medium, but considering the price, I rate it average, verging the border of a good one. Acceptable. (EM-78/100)
Leia em Português
Posted by Eduardo Miranda